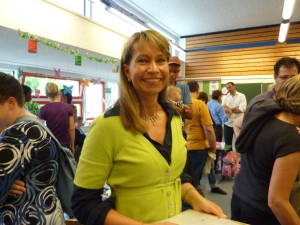 I’ve been so absorbed in my own cultural experiences and impressions that I have not written much of anything about our kids attending the John F. Kennedy School (JFKS).  JFKS is a Berlin public school of more than 1700 German, American, and other international students in Kindergarten through Grade 13. JFKS is celebrating its 50th anniversary this year and is “dedicated to providing a German-American bicultural, bilingual education of the highest quality in Berlin.”

This mission statement was brought home to me this week when I attended a parent night for my son Sam’s 1st grade class.  Sam’s teacher Kathrin told us that she runs a completely bilingual classroom. I had previously felt disappointed at an orientation session for new JFKS families when I learned that American kids in grades K-2 do not attend a German language class.  Little did I realize that Sam would be learning German in a much more organic and holistic way. While Sam’s big brother and sis attend daily German lessons and are going through the somewhat artificial drills and memorization that are standard for beginner foreign language courses, Sam has a daily immersion in his “partner tongue” language.

Sam isn’t speaking a whole lot of German yet (other than to repeat everything the train conductors say, such as “zuruck bleiben bitte” — “please stand back”), but I expect him to soon surprise us with a vast vocabulary that he is storing up in his mind.   Thanks to Sam’s teacher Kathrin (pictured above) for putting in the time and effort to make her classroom truly bilingual.

2 thoughts on “the School and die Schule”