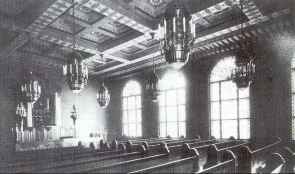 Ohel Hachidusch, the Jewish congregation we attend in Berlin, is a very small congregation that meets in a pleasant church in our neighborhood.  After choosing a bar mitzvah date for our son Avery we were surprised to discover that the church would not be available on that day.  This planning malfunction turned out to be a true blessing in disguise when Cantor Jalda Rebling (Avery’s bar mitzvah teacher) suggested we have the bar mitzvah at the Juedisches Waisenhaus Berlin (former Jewish Orphanage of Berlin).

I cannot imagine a more auspicious venue for a bar mitzvah than a historic building devoted to the welfare of Jewish children. Built in 1912/13, the orphanage operated until 1940. After Kristallnacht many of the children were brought to safety via Kindertransport. The Nazis closed the building in 1942 and deported all remaining occupants to concentration camps. As far as I can tell from what I have read in German, the building languished for years, but was eventually restored and finally reopened in 2001.

The Juedisches Waisenhaus today has a library and an elementary school in addition to the beautifully restored prayer hall.  Avery’s bar mitzvah in October will be the first to take place in the Waisenhaus since it reopened.