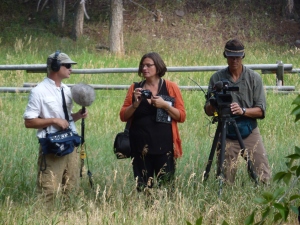 We had fun during our three days of filming for Deutsche Welle’s project on the surviving traces of German Jewish culture in the diaspora. Hanging out with the film crew was a holiday from all the logistics of getting settled back into Bozeman for a while. Answering loads of  questions on camera was even a natural part of processing all the emotions I felt about leaving Berlin after two years. And nothing about the experience smacked of Hollywood, although Randy, our camera man, did shout “action!” a few times.

The caution and hesitation that we felt about working with a German media outlet quickly evaporated the more time we spent with Sabine Kieselbach, the warm and wonderful reporter from Deutsche Welle. I don’t know how much our story will resonate with others, but I’m confident that a broader audience than I have previously reached will learn about the profound consequences that can arise when a family traces its pre-Holocaust roots. Sabine’s interviews covered three generations of our family and produced a range of perspectives on our German Jewish identity and connection to modern-day Germany. I’ll post the link to the program when it airs early next year 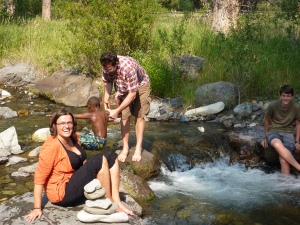 Now that the filming is over, it’s back to the less glamorous task of getting adjusted to life in Montana. I’m struggling with the scope of life in a small town like Bozeman and am doing my best to avoid entering big box stores. I also have a hard time answering questions like “How was Germany?” But each day I remind myself that new discoveries still lie ahead even though one chapter of our German American Jewish story has come to a close.

1 thought on “On location in the Diaspora”