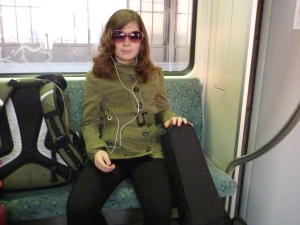 Lately my writing career has been crawling along at the same glacial pace as life in a small town like Bozeman. Wish I had gotten started on this vocation a little earlier in life. Our daughter Olivia just had her first publication at age 13. Our experiences in Berlin nurtured her creative potential as they did mine. You can read her story about a typical day in her twelve-year-old life here: Just Your Average Day in Berlin. I giggled through much of her story and I hope you will too.

Olivia shares my love of the written word, both through reading and writing. Her brother Avery Erwin inherited many special qualities from his Papa Erv (see Namesakes).  Through genetics and cultural heritage, we pass down bits and pieces of ourselves to the next generation. And that is the theme of Deutsche Welle’s new multimedia series Traces of German-Jewish Heritage. Filmed in ten different countries, this project documents the past and present of German Jewish culture. The stories from the United States include a film about our family which you can access here: http://www.dw.de/top-stories/usa/s-31860.

Ute Schaeffer, Deutsche Welle’s editor-in-chief, had this to say about their German Jewish culture project: “We want to show Germany as a modern and open country, but also as a society which recognizes and knows the value of its cultural and historical roots.” In an age of often shallow journalism, I’m impressed by Deutsche Welle’s expansive and well-researched effort to document the cultural history of German Jews. The living reminders of German Jewish history around the globe are something to celebrate during the holiday season.