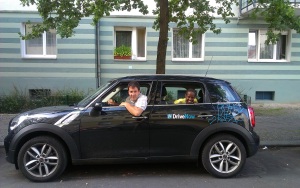 Our sweet beginning to the Jewish New Year came in the form of a nice set of wheels to cruise around Berlin on a Sunday afternoon. Berlin may have one of the best transit systems in the world, but that doesn’t mean my feet are happy at the end of a long day. I’m married to a man who doesn’t like cars, but he took pity on me with another birthday coming up and registered for DriveNow, one of Berlin’s carsharing services.

We picked up our Mini Cooper Countryman in Wilmersdorf after stopping at the Fehrbelliner Platz refugee center to make a donation of much needed train tickets. The atmosphere outside the shelter was calm and peaceful, giving no hint of the desperate hunt underway in Berlin and other cities to find more space to shelter the thousands of asylum seekers entering Germany. We support using the former Tempelhof airport as a temporary shelter. The facility has space for a few thousand people and would become one of Europe’s biggest refugee shelters if approved. It seems fitting for the site that was the staging ground for the Berlin airlift during the Cold War to once again become a locus of emergency relief.

Driving away from the refugee center and north towards Mitte to check out one of the city’s popular third wave coffee joints, I felt the most like a Berliner that I’ve ever felt. We are privileged to live and raise our children in this city at a time when Germany is opening its arms to people who have been forced to flee their homelands. As established Jewish residents of Berlin whose families were refugees in another era, we can offer help and understanding to asylum seekers who do not yet feel at home here. Germany may never be their Heimat, a term that has a much deeper meaning than “home”, but it offers the hope of a new beginning.

At 31 cents a minute, I’m not sure how much driving we’ll be doing in the coming year, but fortunately there are many great ways to cruise around Berlin. While we’re on the move we hope to make small, ongoing contributions to help alleviate the refugee crisis. It’s easy to find ways that you can help out online. Shana Tova!