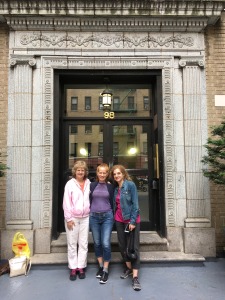 The last time I was in Washington Heights, New York, I must have taken the familiar drive with my parents over the George Washington Bridge from our home in White Meadow Lake, New Jersey. That was (I have to admit) almost fifty years ago. This time I took the uptown #1 train to Dyckman Street with my sister, cousin and daughter. Our mission: to find the building where our grandparents used to live on Thayer Street, the site of many happy childhood memories that linked me to my German Jewish heritage.

Despite encountering the largest number of garbage bags I may have ever seen on a city street, we strolled along in a bubble of nostalgic enthusiasm trying to identify the building where Nana Irma prepared mouth-watering meals for our extended family on all the Jewish holidays. Could it be number 54 or 56, we wondered? The similarity of most of the buildings complicated our search, necessitating a focus on the most minute differences in walkways, window ledges, and brick patterns. Suddenly cousin Debbie shouted out “98!” and two seconds later, there it was.

Looking slightly less care-worn than some of its neighbors, we immediately knew we’d found the right place. Approaching the front door, we peered in to the lobby and practically squealed over the familiar elevator and tile floor. Before we could even consider our next move, the front buzzer rang as if Nana Irma herself had seen us and granted us entry. We stepped inside and I remembered the excitement of rushing around the corner and up the few steps to the ground floor apartment where my nana and papa lived. We’d gotten this far so the next step was to retrace those long ago steps, and, yes, ring the doorbell.

The doorway to the past was literally opened by an incredibly gracious family who allowed the four of us to walk through the small, simple two-bedroom apartment. Fighting back tears in order to make polite conversation, I learned that they too felt at home in this rather humble setting. We stayed only a few minutes, just long enough to indulge our desire to touch the past and feel the presence of those long gone. The apartment was mostly as I remembered it, validating the mental images I’d clung to since I was a little girl.

We can’t travel back in time, but we can hold on to the past if we try.