My personal journey into German Jewish history and contemporary life became more public last week with my article in Tablet Magazine on neo-Nazi terror in Germany.  Here’s the link: http://www.tabletmag.com/life-and-religion/87460/descendants/  Many readers took issue with my commentary and dished up quite a few insults in their comments.  The magazine’s editors chose an ill-suited heading for the piece that made me appear like a country bumpkin from Montana who didn’t know there would be neo-Nazis in Germany.  Actually, I was born in New Jersey and spent most of my life in the Bay Area before moving to Montana in 1996.

Clearly, my German Jewish journey makes many people uncomfortable.  But doesn’t each of us have an odyssey that we must travel in life?  And on that journey don’t we have to step into dark places as well as those suffused with light?  This blog is a journal of the dark and the light places that we have encountered on our return to the land of our ancestors. Perhaps those who fear embarking on their own journeys are quicker to render judgment about the pursuits of others.  Steven, who posted one of the many comments on the article, said it best: “No Jew deserves shame for re-claiming something that was once theirs.”

American Jews still seem to struggle with the fact that German Jews are German as well as Jewish.  “Ha ha” said some commenters, “why don’t you go back home to Montana!”  But Germany is also a country that’s moved beyond stale debates over gay rights and “family values”, a country that offers equal access to health care and higher education.  My children are on their own personal odyssey, thriving on the chance to live in Europe, attend an international school, and learn German.  I actually do feel safe in Germany, but that does not lead me to dismiss the neo-Nazi terror that has taken place here.  Nor do I think the Zwickau terror cell, and the government’s failure to take timely action against it, can be compared to the white supremacy movements found in Montana and elsewhere.

I don’t see the U.S. or Germany in black and white terms; I try to see each country as it is, filled with promise and possibility as well as dangers that pose a threat to democracy.  As a citizen of both countries, I’m privileged to add my voice to those of others who call out when forces of hate lead us astray from a civil society.

I was full of curiosity and anticipation last week when I attended a lecture by Rolf Schuette, the City of Berlin’s Director of Protocol, on the relationship between Germany, American Jews and Israel. Among other interesting themes, Schuette spoke about why Germany’s relationship with Israel is different from its relationship with American Jews.  Germany and Israel enjoy very warm relations and cross cultural contacts between the two countries, mainly through tourism, have skyrocketed in recent years.  Last year, Israel had the second largest number of tourists to visit Germany of any country outside Europe.  Schuette also cited various polls which reveal the surprisingly positive attitudes that Israelis hold towards Germans.

In contrast, Schuette claimed that American Jews have shown little interest in Germany in the post-Holocaust years.  In the absence of contact, attitudes are likely to remain  negative and friction even erupts in families (as it did in my own) when the American descendant of someone who fled the Nazis wants to return to a parent’s or grandparent’s  birthplace. But even more significant was Schuette’s assertion that American Jews lack a “realistic image” of today’s Germany due to this lack of contact.

Schuette’s comments reaffirmed my desire to document our experiences as a Jewish family living in Berlin. It is not that I think American Jews must visit Germany, but that 65 years after the Holocaust there may be some basis for updating our image of Germany.  We must find a way to both honor our tragic history and move forward with an open mind.  This is why I say that the door is open and it is our choice whether to step inside. 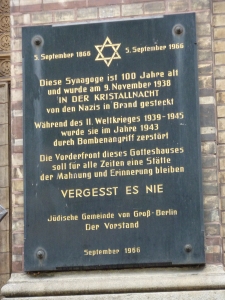 What brings the descendant of someone who fled or survived the Holocaust back to the land on which it took place?  What do those of us who have made this journey expect to find once we are here? The fabric of any individual’s identity is made up of so many threads that any one can be easily overlooked in crafting a life. To go back and pick up a lost or errant thread may be what those of us on this journey have in common. To discover something about ourselves that has always been there but that we could not see.

Sitting in a cafe yesterday with two new friends who come from German Jewish families and have reclaimed their German citizenship gave me the beginnings of a new sense of community.  Our personal stories were different, but we all shared a common background and an eagerness to somehow link our lives with our heritage.  Most Americans at some point in their lives want to explore their roots. For me it is not just about understanding the past, but also understanding myself.  Regardless of how long our family resides in Germany, the time we spend here helps me to feel whole.

While the past beckons and I pursue various efforts to delve into family history, I am still most interested in Jewish life in Germany today.  Although a trip to almost any of Berlin’s synagogues (or even a Jewish book store or community center), means passing through the watchful eyes and security measures of the Polizei, there is a thriving Jewish community in Berlin.  We have taken our first steps into this community by attending services at Ohel Hachidusch, a Jewish Renewal congregation that has welcomed us with open arms and where services are conducted in a mixture of Hebrew, German, and English.  We plan to also visit a few of Berlin’s other non-Orthodox synagogues and I hope to share our experiences on this blog.

As Jews who were leaving our secure little niche in Bozeman, Montana to sample life in Germany, we received mixed reactions from friends and family.  “Germany, why in the world would you want to move there?” was the common query.  But we had many reasons and a suitcase full of questions for which we sought answers.  We were convinced that this experience would somehow shed light on our own identities in a way that armchair conversations and the best books and films could not. I couldn’t have agreed more with one Jewish American writer whose recent blog post was titled: “Jews and Germany: Why You Should Go Even If It Makes Your Grandma Angry.” (www.jewcy.com)

In my case it was my mother who was angry and didn’t even want me to give Germans the satisfaction of speaking their language in spite of my somewhat proficient ability with it. This argument brought back memories of my childhood exposure to the feelings and attitudes of my immigrant grandparents. Both my parents had fled Germany in the late 1930s and grew up in New York City.  As a child I remember that Papa Gus and Nana Irma never wanted to speak German or be reminded of their homeland while Papa Eddy and Nana Ilse loved to sing German songs and share their cultural heritage with my sister and I. In the 1970s Papa Eddy and Nana Ilse took the ultimate step to reunite with their culture and moved back to Germany.  Were they the only Germans to have done this, especially after attaining their prized American citizenship?  I have always wondered about the incidence of German Jews returning to Germany after the Holocaust.

Thanks to encouragement from my friend Diana, I started this blog to document my own process of personal discovery about Jews and Germany. How many are there, where do they come from, are they very religious, or of a more secular variety, and how do they feel living as Jews on soil once dominated by the Nazis? Many writers have documented the wave of Jewish immigration from the former Soviet Union that corresponded with the empire’s collapse, but are Jews coming to Germany from other parts of the world as well? Since Germany is now home to more than 200,000 Jews, is it time for some of us to acknowledge that Jews can have a positive experience in Germany and seek to understand that experience? I am especially interested in reaching out to American Jews about the nature of Jewish life in Germany and plan to further explore this topic on my blog.  More to come……