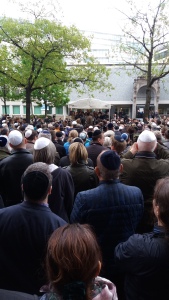 I forgot to bring a kippa to this week’s ‘Berlin Wears the Kippa’ rally, held in the aftermath of a recent anti-Semitic incident in an area of Berlin known to attract more foodies and trend-setters than bigots and hooligans. “Oh well, here I am four years after attending a similar rally against anti-Semitism at the Brandenburg Gate and all the speeches sound exactly the same,” I thought. I felt more glum and out of place than inspired by the crowd of 2500 or so people clapping and nodding their heads in response to the speeches.

One thing that has changed since 2014 is that Germany has a new anti-Semitism commissioner who will take office next week. One of Felix Klein’s top goals is to create a centralized database of anti-Semitic incidents. Better documentation of such hate crimes will lead to stronger response and prevention measures. But it’s not enough. I hope Mr. Klein will also take steps to increase community-level initiatives to confront hate crimes, the vast majority of which are already documented to come from the far right.

After my failed attempts to pursue volunteer work with the Jüdische Gemeinde (Berlin’s official Jewish Community) a few years ago, which I wrote about in Tikkun Daily, I turned my attention back to other pursuits. But now that I’m close to having a final manuscript for my book, A Place They Called Home, it’s time to revisit the question “What can I do?” I’ve been inspired by initiatives such as AVIVA Berlin’s efforts to promote Jewish-Muslim dialogue, the 2013 Jew in the Box exhibit at the Jewish Museum Berlin, and the Happy Hippie Jew Bus (which came to visit my students this week). Berlin is full of creative people who are indeed doing something.

Wearing a kippa to support the fight against anti-Semitism is an important symbolic measure, a starting point for more sustained community action. Berlin is a creative metropolis where top-down and bottom up initiatives can combine to foster an environment where Jewish leaders need not warn the Jewish community not to wear a kippa when walking around our city.

You can read an expanded version of this post on The Times of Israel Blog.

One of the nice things about living in Berlin is that ordinary events tend to be held in extraordinary places. When I was asked by AVIVA-Berlin to give a brief presentation about my great-aunt Meta Adler who was a Holocaust victim, I had no idea I would be delivering my remarks in Rathaus Charlottenburg. Like many parts of Berlin, Charlottenburg was formerly an independent city in the Prussian province of Brandenburg. Construction of this ornate town hall took place while Meta was a young girl, but the building suffered severe damage during World War II. Rebuilt after the war, the Rathaus seemed a fitting place to share Meta’s story with a small audience that came to learn about AVIVA’s “Writing Girls” project.

This year I didn’t uncover any family secrets on a par with my 2011 discovery of my aunt who was left behind when my father’s family fled Germany. Things seem to be in a state of harmony in my family for the time being. Of course that could change at the end of the month when I make a quick trip to visit my mother in her new assisted living home in California. But for now I feel a sense of peace as the year draws to a close and we are firmly settled back in Berlin.  That sense of peace is reflected in this photo taken in the Black Forest by my friend and Fellow Traveler Michael Staubes.

Back in April an interesting message caught my eye among the many that land in my electronic inbox each day: “AVIVA-Berlin Seeks Participants for Jewish Women’s Histories in Berlin Writing Project.” My eyes quickly devoured the two page call for proposals while my brain was already churning out possible story ideas. There was just one apparent glitch — AVIVA was looking for Jewish women writers from Israel and the former Soviet Union. This wasn’t the first time that I felt a little left out as an American Jew in Germany. But there was no need for wounded feelings. I contacted Sharon Adler, publisher of AVIVA-Berlin, and she eagerly agreed to include me in the project.

According to Sharon, there are currently 10 Writing Girls who range in age from 16 to 61. Their stories are about Jewish women in Berlin, from the present and the past, with a special emphasis on “forgotten stories.” My article is a follow-up to an earlier piece I wrote about the discovery of my great-aunt Meta Adler. Although Meta was not from Berlin, her story has become intertwined with my own life as a Jewish woman in Berlin. Many thanks to Sharon Adler for her support of Jewish women writers!

Here is the link to my story:
http://aviva-berlin.de/aviva/content_Juedisches%20Leben_Writing%20Girls.php?id=141266