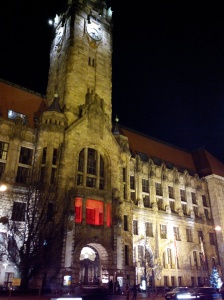 One of the nice things about living in Berlin is that ordinary events tend to be held in extraordinary places. When I was asked by AVIVA-Berlin to give a brief presentation about my great-aunt Meta Adler who was a Holocaust victim, I had no idea I would be delivering my remarks in Rathaus Charlottenburg. Like many parts of Berlin, Charlottenburg was formerly an independent city in the Prussian province of Brandenburg. Construction of this ornate town hall took place while Meta was a young girl, but the building suffered severe damage during World War II. Rebuilt after the war, the Rathaus seemed a fitting place to share Meta’s story with a small audience that came to learn about AVIVA’s “Writing Girls” project.

This year I didn’t uncover any family secrets on a par with my 2011 discovery of my aunt who was left behind when my father’s family fled Germany. Things seem to be in a state of harmony in my family for the time being. Of course that could change at the end of the month when I make a quick trip to visit my mother in her new assisted living home in California. But for now I feel a sense of peace as the year draws to a close and we are firmly settled back in Berlin.  That sense of peace is reflected in this photo taken in the Black Forest by my friend and Fellow Traveler Michael Staubes.

It’s been almost a year since our family history tour took us to Altwiedermus. And it’s taken about that long to process most of what we learned on that important trip.  The stunning discovery that I had a great-aunt Meta who was left in Frankfurt when my father’s family emigrated to the U.S. reverberated for weeks after our return to Berlin. Our trip into the past shed new light on my German Jewish family history and raised many new questions about my family.

There were two outcomes from this trip. One was the decision to dig into my family’s past and learn why I had never been told about Meta. This was something I tended to only sporadically over the past year when I had time. I still don’t have a clear answer and only very slowly came to understand that there was an unspoken family rule to remain silent about Meta. I’ve learned not to take the previous generation’s account of the past for granted and will soon share a piece I’ve written about the experience of uncovering Meta’s story.

The other outcome was our decision to create a memorial for Meta. This has been slightly more straightforward than my efforts to dig into the past. Our family has been deeply impacted by the stolpersteins (brass stumbling stone memorials) scattered across Germany and other European countries. We felt Meta should have her own stolperstein.  I honed my German language skills during months of countless emails to discover the details of Meta’s fate and seek approval to place a cobblestone memorial in the ground for her. Our son Avery also learned Meta’s story and then raised the 120 euros for her stone as part of his preparation to become a bar mitzvah.

On July 2, 2012 Meta’s stolperstein will be laid in Altwiedermus. The Ronneburg community plans eleven stones for Altwiedermus and Huettengesaess. These will be the first stolpersteins in this rural Hessen area and the artist Gunter Demnig will be present to mark the occasion.  Our family will be there as well. I’m grateful to many people in Germany, including readers of this blog, for helping us learn what happened to Meta. Her stone will join the more than 32,000 stolpersteins dedicated to victims of the Holocaust. 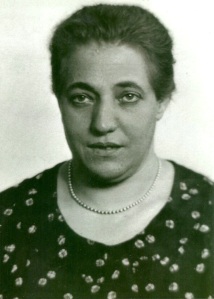 We know almost nothing about her and that will never change. But she will be remembered. We must rely on our imaginations to fill in the enormous gaps about her life in Germany before the “final solution” became her fate. And we can imagine her new life in America, if only the U.S. government had approved her application to emigrate with the rest of my father’s family.

What we do know is that she was an unmarried Jewish woman who worked as a maid and was too shy or scared to give satisfactory answers to the questions that determined eligibility for emigration to the U.S.  According to my Aunt Ellen, my grandmother was forced to send Meta back to Frankfurt after the rest of the family was granted permission to emigrate in 1938.  At the age of 44 Meta returned to Frankfurt without any personal resources. She spent another four years there, was eventually forced into a Judenhaus, and then deported in May 1942. We have tried without success to find out where she was deported to and her date of death.

Later this year we will place a stolperstein (brass stumbling stone) in Frankfurt for Meta. This stone, placed at the site of Meta’s last freely chosen residence, will join the more than 25,000 others throughout Europe (see Stolpersteine: Stones to Remember). Pedestrians who tread on Meta’s stone will have the opportunity to reflect on another Holocaust victim.  Meta’s stone will also represent the 13 Jews of Altwiedermus and my paternal ancestors whose lives were obliterated by the Nazis. Our son Avery, who will have his bar mitzvah in Berlin this October, will raise the 95 euros for Meta’s memorial stone as his bar mitzvah project.

My father was born in 1929 in the tiny village of Altwiedermus in the state of Hessen, Germany.  Altwiedermus had a population of 300 when Hitler came to power in 1933, including 27 Jews.  Many of those Jews were relatives of my family.  Thirteen of the Jews of Altwiedermus were killed during the Holocaust.  There are no Jews living in Altwiedermus today.

Thanks to Gisela Lorenzen, village historian, for her painstaking efforts to piece together the story of the Jews of Altwiedermus.  Gisela has put together part of my family tree dating back to 1770 and she shared many details  of her research with us on our recent trip to my father’s birthplace.

Altwiedermus must have changed a bit since my father fled to America with his mother and sister in 1938, but it is still a sleepy little village with a population of less than 1,000.  One of the most remarkable buildings we saw was the old synagogue.  Built in 1866, the synagogue had its own mikvah and appears to have been just large enough to fit the small number of village worshippers.  It is one of the smallest synagogues in Germany.  The synagogue is now a historical monument although there are no funds to adequately restore or preserve the building.

My father’s family had a successful tannery business.  The family property (shown below) included a large house with separate buildings for leather working and animals.  All three buildings are still standing.  The house was passed on to refugees from Silesia in 1945 whose descendants live there today.

The trip to Altwiedermus was very emotional for me.  Most of my father’s family got out of Germany in time to save their lives. One who didn’t was Meta Adler, my grandfather’s sister, for whom we hope to initiate a memorial project.  She was an unmarried woman without the means to devise her own escape. 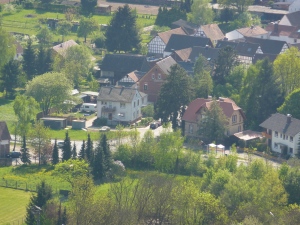 We bid farewell to Altwiedermus from the medieval Ronneburg castle set in the hills high above the village. I’m not sure when or if I will ever be back, but thanks to Gisela I now have a better appreciation of my family history. Even more important, I have photos and documents to pass along to my children and future generations of our family.