The writing, editing, and proofreading are done. The hand-wringing, fretting, and kvetching are almost behind me. My co-authors, a sundry mix of descendants of German Jews spanning generations and continents, have stuck with me on an uphill path that slowly twisted towards its final destination. Together we have produced a whole that is greater than the sum of its parts. Our book, A Place They Called Home, is scheduled for release on December 1st and can now be pre-ordered on Amazon.

So what’s next? Maybe not much for a while. But I can’t help thinking that it’s important to build on whatever momentum comes from my stubborn pursuit to broaden the narrative of the post-Holocaust Jewish experience with Germany. I’ve tried to bring new voices to this narrative, hoping to have a modest impact on public perceptions and opinion. Few Jewish opinion leaders in the U.S. or Germany today represent my views. That’s why I’ll continue to voice my perspective, whether through writing, public speaking, or even political action. 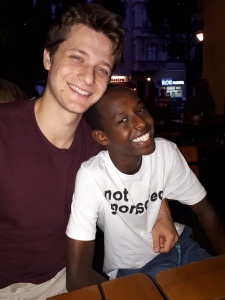 I’m toying with the idea of creating a speakers bureau to bring a diversity of Jewish voices into German schools and communities. I’ll try to also contribute and promote more positive news coverage of Germany’s Jewish population, like the recent reports on a community initiative to rebuild the Fraenkelufetr synagogue in Berlin’s Kreuzberg district, an area with a large immigrant population. And there’s no question we need more interfaith projects and initiatives. German Jews, with our history of loss and displacement, are uniquely positioned to support migrants and refugees who’ve come to Germany after fleeing their homelands.

I contemplated my next steps over a family birthday dinner on the sidewalk patio of one of my favorite restaurants this week. As you can see, Avery and Sam were very enthusiastic about whatever project I decide to launch or join next. They’re used to hearing about all my latest plans and ideas. And they’re a pretty good cheerleading squad too. My greatest hope is that my book, this blog (which is nearing its end), and next endeavors will leave a valuable legacy for my children.

It felt more like Mardi Gras than Labor Day in Berlin. With all of the partying going on, I was too distracted to focus on the political and social messages of the day. We merged with the festivities as soon as we boarded the U12 and headed into Kreuzberg with all the beer and wine guzzlers who were a few decades younger than us. Our destination was the MyFest, an annual event to celebrate Spring with enough food, music, and cultural offerings to put even the most dour Berliners in a happy state of mind. 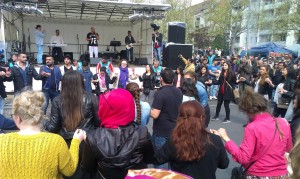 Squeezing our way through the crowds at Kottbusser Tor, we were expecting to come across at least one of Berlin’s typical protest scenes. But although the area was the site of May Day violence and riots in the 1980s, the MyFest is now mostly a hotbed of communal fun. Relieved at the absence of tension in the air, we settled in to enjoy some great köfte and Turkish music at Mariannenplatz.

Despite the holiday, it was soon time to head back home so I could do some afternoon reading for my seminar on Jewish migration to Germany. During our Rückfahrt (return trip), I was pleasantly surprised to come across this new poster at the Zoologischer Garten train station. Angela Merkel is asking our society to recognize immigration as an opportunity. This was a fitting message for Labor Day, especially given Germany’s looming population decline and the particularly strong fall in the proportion of working-age people expected by Germany’s statistics office. I look forward to discussing the poster with our seminar students on Monday.

Jewish Berlin dishes up great soap opera material. While financial scandals and power struggles dominate the official Jewish Community of Berlin, tensions abound at the social level as well. The Jewish Stammtisch, an informal social gathering that I attended when we first moved to Berlin in 2010, had a rift and split into two groups. One group meets at Terzo Mondo, a Greek restaurant in West Berlin’s “schicki-micki” Ku’damm neighborhood. The other group gathers at Seerose, a vegetarian restaurant in the more hip Kreuzberg district that borders on East Berlin.

I don’t detect much of a cultural difference between the two Stammtisch groups. Both are predominantly made up of middle-aged and older Jews from the diaspora who sit around sipping wine and shmoozing for a few hours once a month. Their evening get-togethers may not rock the city, but they do provide Berlin’s Jews with an opportunity to explore shared family and historical connections. 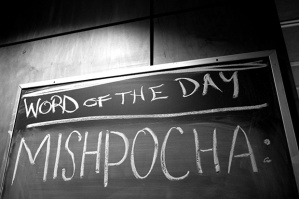 As I chatted with a woman from Argentina at Seerose last week, we discovered that we each had a parent who fled Hamburg in the late 1930s, another parent from Hessen, and we both have cousins who live right near each other in Israel. A sweet older gentleman who was sitting with us (also from Argentina, but born in Berlin in 1936 and once again a Berliner) kept exclaiming “die ganze mishpocha!” as we continued the conversation and learned of other similarities in our family backgrounds.

“Die ganze mishpocha” is a Yiddish phrase that refers to an entire family network of relatives and even friends. Lots of Jewish Berliners bemoan the cultural and political divide between the City’s East European Jews and the much smaller group of us with German Jewish roots. But Berlin is still a place where anyone with a German Jewish background may find others who are a part of their mishpocha. Even if you don’t meet anyone from your mishpocha, those who you do meet will have their own fascinating stories to tell over a glass of wine, whether in the posh west or trendy east part of the City.

A few days after my panicky call to the German Consulate in San Francisco about my lost citizenship application, I received a phone call from a Schoeneberg district official informing me that my application had been found.  Schoeneberg is the Berlin district where we live and it is also the locale for John F. Kennedy’s famous “Ich bin ein Berliner” speech in 1963. In moments of despair about my stalled application, I can at least take solace in Kennedy’s claim during his speech that “all free men, wherever they may live, are citizens of Berlin.”

The local official who now has my German citizenship application had no explanation for why and how the application had suddenly turned up.  He also promised that I would receive a letter within two weeks letting me know that his office was in possession of my application.  The two weeks have now come and gone with no letter having appeared in my mailbox.  My query to this official about when I might expect the application to actually be processed was met with firm proclamations that it would not be possible to give me any time frame for such an official business matter.

Fortunately, my friend Diana arrived for a visit last week and it was good to have the company of a friend from back home.  We hit the pavement hard while she was here and had lots of girl talk.  We especially enjoyed a visit to one of Berlin’s Turkish hamams located in an old chocolate factory in Kreuzberg.  There’s nothing like a good long sweat followed by a soothing bath in the company of good friends to ease the tensions of life as a Berliner.