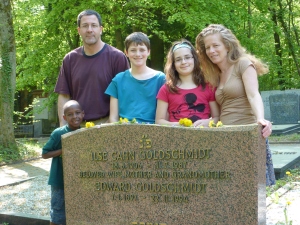 Nana Ilse was a very refined woman, I told my kids, upper class and well-heeled, moody, but also a loving grandmother. She was the only one of my four German Jewish grandparents who wanted to teach me German when I was a child living in New Jersey. Trips over the George Washington Bridge to visit my grandparents in New York City meant a chance to learn a new song or poem in a language that always beckoned to me.

We traveled to Wiesbaden over our Spring Break to visit my grandmother’s final resting place, 200 kilometers from where she was born in Kassel, Germany in 1906.  She had fled to the U.S. as a young married woman when my mother was 5 years old in 1938.  For many years she tried to make the U.S., and later Israel and Switzerland, her home.  But it was Germany where she returned towards the end of her life with my step-grandfather.  She died in 1987 and this was my first visit to her grave. The visit became a family adventure when we learned that the Jewish cemetery was closed for Passover and would not reopen during our stay.  We waited until the maintenance workers at the Christian cemetery next door weren’t looking and quickly climbed the fence and had the entire cemetery to ourselves.

Nana Ilse had good taste in all things, and her choice of Wiesbaden as a home was no exception.  We had fun exploring the city’s parks, architecture and shops and even managed to find time for a brief excursion to the Rhein.  We were also taken on a Jewish history walking tour by Dorothee Lottmann-Kaeseler who has devoted herself to various Holocaust memorial efforts in Wiesbaden and throughout Germany. By chance, the City of Wiesbaden had just dedicated its new Holocaust Memorial (shown below) after many years of effort by local residents.

Bringing my husband and children to this beautiful area of southern Germany from where I trace my roots fulfilled a goal I have had since we relocated to Germany last summer. From my upper crust grandparents on my mother’s side of the family to the earthy leather workers from Altwiedermus, we now have a better picture of our lineage to carry with us into the future. 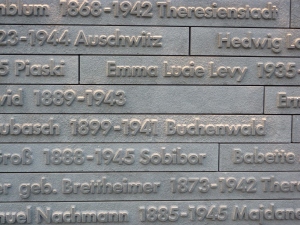 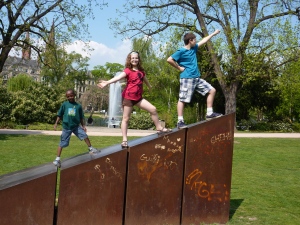